Being one of the largest ferry operators  in Copenhagen, Denmark, they needed to augment their existing communications infrastructure for their vessels operating along the Gedser to Rostock route. Bandwidth and network availability levels for the legacy link across the servicing fleet was inadequate for the high-speed, seamless browsing experience that customers had become used to throughout their daily lives.

They needed a solution that would deliver broadband connectivity for its 90 minute, 48.9 kilometer (30.4 mile) crossing from the docks on Falster Island in Demark to the station in Rostock, Germany; and allow for enhanced WIFI Hotspot operations for patrons, as well as continued operations for the point-of-sale (POS) communications, and VPN needs of the vessel.

They needed a solution that would take over for the bulk of their communications and data needs, while also allowing for additional link redundancy to assist with any load balancing, performance-based routing, or hot-standby needs they may have. 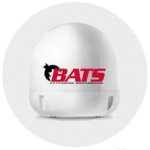 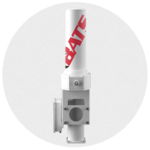 BATS Wireless, together with integration partner SpectoRemote, provided its industry-leading antenna tracking and stabilization solution for the Gedser to Rostock deployment, to enable a broadband link that was able to meet and exceed the bandwidth requirements for the ferry route.

BATS’ DVM 30 system was placed at high-points on both ends of the crossing, powered by a 25dBi MIMO antenna and MIMO radio, while two DVM 30 systems were placed abroad the vessel in port starboard positions, also powered by 25dBi MIMO antennas and MIMO radios. An additional FAST system was employed at a highpoint onboard to allow for additional redundancy.

Together, the solution notably achieved and exceeded the desired throughput for the ferry route; this configuration allowed for a point-to-multipoint (PTMP) connection while in transit, delivering a stable, link-redundant 144 Megabits per second of throughput, with performance peaks of up to 200 Mbps. These speeds allowed the operators the ability to provide an enhanced internet browsing experience for its patrons, while also dramatically increasing network performance.

Following the successful deployment of the BATS system aboard the initial vessel, the solution entered into production across the fleet; bringing reliable, high-speed wireless internet connectivity to other vessels for the entirety of their routes.

Reach out to us at BATS to find how you can extend your broadband network!