Getting to Know a Bit More About Drones & UAVs

While quad-copters are generally the most recognizable drone type, there are a varied lot of drones that suit a multitude of different operations. Where a quad-copter may be most suitable, a fixed-wing drone may seem prohibitive and cumbersome. By identifying these different drone types and their respective assets and liabilities, operators can choose the optimal drone for their precise applications. 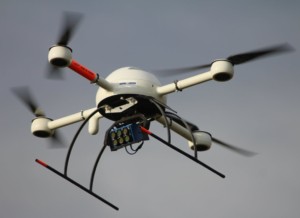 Multi-rotor or quad-copter UAVs are frequently deployed for short term aerial visuals and eye-in-the-sky work. Due to their ability to provide operators immense control and precision over visual framing, quad-copter drones are ideal in aerial photography applications. However, quad-copter drones do have certain limitations that hinder their scope of available work. One limitation is their decreased endurance and speed. This makes them unsuitable for large-scale aerial mapping, long-range monitoring, and inspection. Quad-copters are also limited by their short battery life. With a light camera, most multi-rotor UAVs can only sustain 20-30 minutes of flight time. Heavy-duty multi-rotor UAVs can accommodate heavier camera payloads, but with a proportional sacrifice on battery life.

However, single-rotor helicopter drones have their share of complications. Due to their complex design and prohibitive cost to own, they are not a good fit for the average every-day pilot. Additionally, due to the larger-than-average size of the heli-drone’s rotor blades, there is a markedly increased risk for severe injury or even death. Finally, single-rotor helicopter drones require more frequent maintenance than multi-rotor or fixed-wing drones, increasing cost of ownership.

Fixed-wing hybrid Vertical Take-Off and Landing (VTOL) drones are unmanned aircraft on the bleeding edge of remote piloting technology. Fixed-wing hybrid drones find success in combining the effectiveness and long-range travel abilities of fixed-wing drones with the hovering ability of multi-rotor and single-rotor drones. Additionally, their ability to both launch and land vertically sets them apart from the existing catalog of available drone technology. While these types of drones were originally designed in the 1950s and 60s, they frequently failed in the field, causing them to be cast aside in favor of more reliable manned and unmanned flight options. However, with advancements in gyrostabilizers, accelerometers and autopilot technology, Fixed-wing hybrid VTOL aircrafts have become a viable option for remote piloting applications across the globe. Fixed-wing hybrid VTOL drones are the aircraft of choice for aerial delivery services, such as those being launched by Amazon.